Living each day much muchier

Drops in the ocean 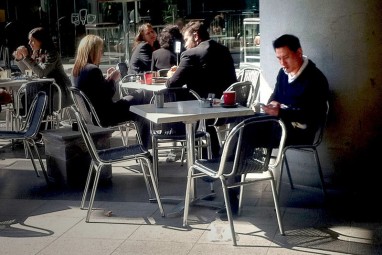 A woman in her early 30s walks along a busy, urban street. The camera focuses on the men in turn and a profile box appears above each head.

Right4U, 34, 6’2”, within 10km of North Melbourne. Likes hanging out with friends, keeping fit, traveling with the right person, nights out on the town or cuddled on the couch with red wine and a DVD.

ItalianMade, 40, 5’9”, within 25km of North Melbourne. Likes being social, going to the gym, travel, walks on the beach, cooking for two.

The woman shakes her head.

They’re not real profiles by the way, but a great many of them read like that.

I signed up to an internet dating site a week ago.  It was partly a step of courage to put myself in the path of love and the rest was pure curiosity.

Suddenly, I was getting contacted left, right and centre.  Most of them were men playing the numbers game. We had nothing in common. I said ‘thanks but no’ to nearly 100 free flirts.

I feel like a chip tossed among the seagulls. It’s a form of despair, like being thirsty in the middle of the ocean.

You might think I’m not really serious if I’m saying no so much, but I’m being cautious with their money.  It costs to make real contact.

Granted, it’s the same cost as shouting a sparkly girl a sparkly cocktail at a club (coincidence?) but I expect they’d rather spend it on a promising prospect.

It’s not as dire as I make it out to be.  There are warm and fascinating gentlemen on there who I hope are like that in real life.

The idea is based on market surplus driving down value.  Why make the effort when there are so many just like him and it’s so easy to brand switch?

It assumes people became a commodity when the act of searching and contacting them was commodified.

Is choosing between chats and photos really the same thing as choosing from a shelf display of toothpaste?

If we must use economics to describe internet dating, I think the opposite is true.

It’s a story of scarcity. If you find someone different and interesting, someone you connect with, then you’ve found a needle in the haystack.

You found fresh water in the ocean and they are all the more valuable for their uniqueness.

3 comments on “Drops in the ocean”

Thinker. Writer. Photographer. Dancer. Not necessarily in that order.